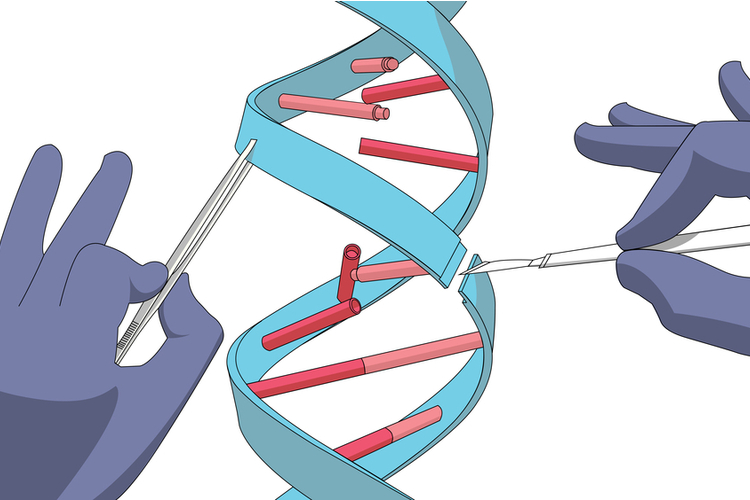 The speed of development of genetic engineering technologies is amazing. Probably, everyone remembers what a furore CRISPR-Cas9 genome editing technology made in its time. And now it is ready to be scrapped.

And all because a new technology was born, invented by scientists at the Massachusetts Institute of Technology and Harvard University, who left the old CRISPR-Cas far behind.

CRISPR-Cas9 technology is essentially unreliable and too awkward. But the innovative method of prime editing (prime editing) allows you to fix in the genome everything that you could wish for, up to the bottom.

Primary editing does not require the creation of double-stranded breaks, and instead of the RNA guide, which CRISPR / Cas uses to determine the desired piece of the genome, it includes an extended guide RNA (prime editing extended guide RNA, pegRNA, prgRNA).

Elongated guiding RNA targets the modified Cas9 enzyme to cut only one strand of DNA (it is known that ruptures of two strands can cause unintentional mutations).

After this, the reverse transcriptase enzyme directly copies the edited genetic information contained in the prgRNA to the target genomic site.

“The fact that we were able to directly copy the new genetic information to the target site was a revelation. We were really excited, ”says chemical biologist Andrew Anzalone, one of the authors of the study.

Most importantly, for the first time, researchers were able to effectively change one “letter” of DNA to any other: adenine (A), cytosine (C), guanine (G) and thymine (T) are now interchangeable with all of 12 possible methods. So far, only a few options for such replacements have been feasible.

“Thanks to the initial editing, we will finally be able to directly correct the mutation of sickle cell anemia by restoring the normal sequence and removing the four additional bases of DNA that cause Tay-Sachs disease without completely cutting the DNA,” says biologist David Liu.

The team of scientists has already made about 200 genomic substitutions on mice, while the new technology yielded an order of magnitude less unwanted by-products and inappropriate changes than the CRISPR-Cas9 approach.

The approach still requires some refinement. Nevertheless, according to experts, using the new method it will be possible to cure about 90% of all human genetic diseases.

Flu may be fatal for asthmatics