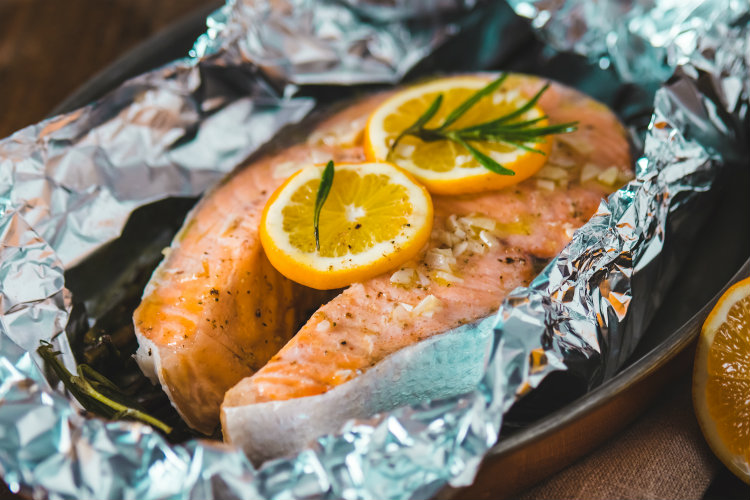 If you bake fish, vegetables or meat in the oven, you are most likely doing this with aluminum foil. But what you may not realize is that the foil particles will definitely get into the food – and this can be dangerous to health.

How dangerous is aluminum

In fact, research shows that the use of aluminum for cooking is generally safe. But considering that today it is the most popular material for the manufacture of cookware (pots, pans, appliances), with an amount easy to overdo. Previously, copper played the role of the most popular material, but eventually aluminum replaced it, since the latter is easier not only to produce but also to clean.

Human bodies can handle small amounts of aluminum very effectively. This means that the minimal effect of aluminum on the body will not be a problem. The World Health Organization says the same thing, noting that the safe amount of light metal is about 40 mg per kilogram of body weight per day. That is, for a person who weighs 60 kilograms, the allowable consumption of aluminum is 2400 mg.

The problem is that most of us are exposed to far greater exposure. Aluminum is present in corn, yellow cheese, salt, herbs, spices and tea. It is found, as already mentioned, in glassware, as well as in some pharmacological agents, such as antacids (preparations for treating the gastrointestinal tract), and antiperspirants. Plus, aluminum sulphate is actively used to coagulate (clarify and bleach) water.

Today, many researchers are trying to figure out whether excessive exposure to aluminum can pose a threat to human health. This is also necessary because studies show that high concentrations of aluminum are very often found in the brain tissue Alzheimer’s patients. A group of scientists working on this issue, writes The Conversation, concluded that Alzheimer’s disease is a modern disease that may develop due to altered living conditions associated with the industrialization of society. These conditions, among others, may include high levels of aluminum in everyday life.

Aluminum potentially increases other risks. For example, scientists were able to establish that high consumption of aluminum is harmful at least for patients with bone diseases and renal failure.

What does this have to do with lemon juice and spices

Given all of the above, it is important to keep in mind the concentration of aluminum in the food that you deal with on a daily basis. Speaking of dishes, aluminum leaching is easy to avoid here – it is enough to boil water in it several times until the surface becomes matte. Yes, dishes look better when they are shiny, but remember that a matte base is better for your health.

However, cooking chicken or fish in foil is a story of a different order. Aluminum foil is disposable, so you cannot create an inert layer before use. At the same time, studies show that the migration of aluminum into food during its preparation is above the permissible limit set by WHO.

Also, when it comes to cooking in acidic solutions, such as lemon and tomato juice, the level of aluminum in it becomes even higher. And leaching is further enhanced if you add spices to the dish that is being cooked in the foil.

In other words, it is better not to use aluminum foil for cooking, replacing it with, say, cooking paper. But already ready and chilled food is wrapped in foil quite safely – but not for a long period, since the aluminum will start leaching anyway after a while.

11 signs of heart disease that should not be ignored

7 errors due to which the tonometer overstates the pressure

What to do if your ear is laid?