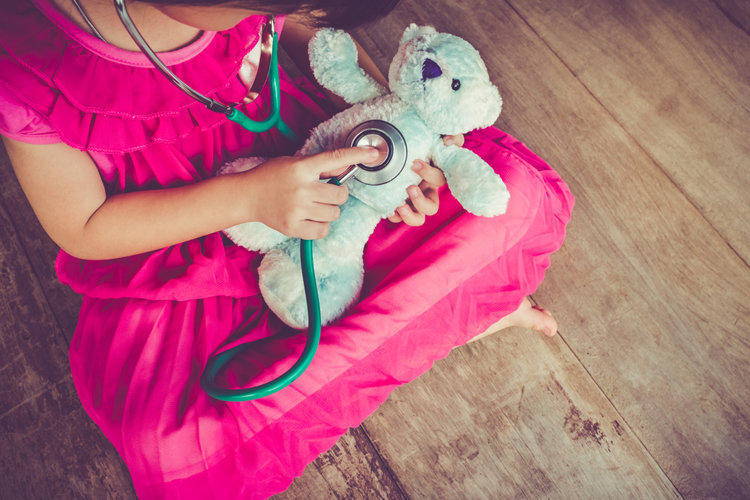 Infectious mononucleosis is a disease of viral etiology. The infectious agent is a herpes-like Epstein-Barr virus that can cause not only infectious mononucleosis, but also provoke the development of nasopharyngeal carcinoma, Burkitt’s lymphoma and, probably, a number of other diseases. Statistics show that this disease is most common in children.

N.F. Filatov was the first to announce viral etiology of infectious mononucleosis at the end of the 19th century, calling it idiopathic inflammation of the lymph nodes. Subsequently, the disease was called Filatov’s disease, monocytic angina, benign lymphoblastosis, and glandular fever. In modern science, the name “infectious mononucleosis”, often referred to by non-specialists as “immunocleosis”, is adopted. Herpes-type virus responsible for the development of the disease was isolated by M. A. Epstein and I. Barr in the middle of the XX century.

Mononucleosis is a disease that is transmitted by airborne, contact and hemolytic (intrauterine and transfusion of blood and tissue from the donor to the recipient). The source of infection are not only patients with severe symptoms, but also people who have an asymptomatic illness, as well as virus carriers. Pathology belongs to the group of so-called “kiss diseases”, since the transmission of the virus with particles of saliva during a kiss is one of the most probable contacts between the carrier and the child.

The development of exacerbation of mononucleosis in children is the period when the immune system is weakened. There are two age stages of reactivation of infection: in children under five years of age and in adolescence (about 50% of cases). Both periods are characterized by physiological changes, intensity of immunity, increased number of body contacts.

Among male children, the development of infectious mononucleosis is noted two times more often than among girls. The main peak of the disease occurs in the autumn and winter periods due to a decrease in general immunity and an increased number of contacts in closed rooms (kindergartens, schools, transport, etc.).

The virus is not resistant to the environment, dying when the droplets of saliva are drying, exposure to UV rays, and disinfection. The most common infection occurs during close or prolonged contact with a sick person or a carrier of the causative agent of the virus.

After the causative agent of the virus enters the human body, the development of symptoms of the type of infectious mononucleosis occurs on average in 1 out of 20 children. After clinical recovery, the virus remains in the tissues and can provoke relapses when the immune system activity drops, manifesting itself as an erased picture of the infection process, as well as chronic tonsillitis, chronic fatigue syndrome, Burkitt lymphoma, nasopharyngeal carcinoma. Relapses are especially dangerous against the background of immunodeficiency states caused by taking certain medications (immunosuppressants), living conditions or other diseases accompanied by severe immunosuppression.

Diagnosis of infectious mononucleosis is often complicated by the variability of symptoms and their time of occurrence, in the mild and atypical forms there may be no characteristic and most striking signs, manifested depending on the activity of resistance of the body’s defenses. The course of the disease may have a wave-like character with alternate amplification and weakening of the severity of symptoms.

The incubation period of the disease averages from 7 to 21 days. The beginning is both gradual and acute. With the gradual development of infection at the initial stage, this process is marked by a general deterioration of health, an increase in body temperature to subfebrile parameters, catarrhal manifestations (congestion, swelling of the nasal passages, hyperemia of the mucous membrane of the nasopharynx, swelling, redness of the tonsils).

Acute onset of the disease is characterized by a sharp increase in temperature (38-39°C), fever, chills, increased sweating, headache, feeling of aches in skeletal muscles, severe pain in the throat when swallowed. Fever can last up to a month (sometimes longer), accompanied by periods of increase and decrease in body temperature.

A characteristic symptom is swelling of the lymph nodes (occipital, submandibular, and posterior cervical) in the absence of tenderness or weak painful sensations during palpation in the early stages of the development of the disease. With the development of the disease and the absence of therapy, not only prolonged (up to several years) pain in the lymph nodes, but also an increase in their number is possible.

Other symptoms of infectious mononucleosis include:

A rash is noted in a patient as a result of an inflammatory process in the mesentery and appears 3-5 days after the onset of the disease, as pigmentation spots with a pink to burgundy color variability. Rashes can be localized or spread throughout the body (face, limbs, torso). This symptom does not require treatment and care. The rash persists for several days and then disappears on its own. Itching is absent in the norm, the addition of pruritus on the background of antibiotic therapy means the beginning of an allergic reaction and the need to prescribe an antibacterial agent of another group.

The disease may be accompanied by the development of polyadenitis, nasopharyngitis, tonsillitis, bronchitis , tracheitis, interstitial pneumonia, bone marrow tissue hypoplasia, uveitis, jaundice clinical picture as a consequence of hepatosplenomegaly. There is a serious danger that a significant enlargement of the spleen in infectious mononucleosis can lead to organ rupture.

There is no uniform systematization of symptoms, manifestations of the disease vary depending on the age, the body’s immune response, the presence of comorbidities and the form of the disease. Individual symptoms may be absent or prevail (for example, jaundice in the icteric form of mononucleosis), therefore this symptom of the disease causes an erroneous primary diagnosis.

The period of recovery is 2-4 weeks after the manifestation of the disease. In some cases, chronic infection is observed for up to one and a half years.

Specific antiviral therapy for infection with Epstein-Barr virus is absent, treatment in adults and children is symptomatic and supportive.

During therapy, especially in childhood, the use of acetylsalicylic acid (aspirin) is prohibited due to the high probability of developing Reye’s syndrome and paracetamol containing drugs that affect the liver (this disease makes the liver vulnerable).

In all other cases, strict observance of bed rest at home is assigned.

Directions for the treatment of children with infectious mononucleosis

With a mild form of the disease and an acceptable state of health, children suffering from infectious mononucleosis are recommended to walk in the open air without high physical activity and hypothermia.

Most often, clinically significant signs that determine the need for a hemolytic study, consider the presence of a complex of infection manifestations: tonsillitis, swollen lymph nodes, liver, spleen, feverish state.

The main diagnostic value for infectious mononucleosis is the laboratory analysis of blood for specific antibodies to Epstein-Barr virus (the presence of IgM antibodies indicates acute infection, IgG indicates contact with the infection in history and the absence of acute process). It is possible to assign a monospot test that detects the presence of a virus in the patient’s saliva, although its content in the biological fluid is detected within six months after clinical recovery.

Other studies assigned to diagnose the disease and determine the patient’s condition and predict therapy include hemolytic and instrumental tests.

Clinical and serological blood tests are also prescribed after recovery, which allows to determine the effectiveness of therapy and the progress of health recovery, track the development of possible complications of the disease, including those that are remote in time.

Complications and effects of infectious mononucleosis in children

Among the common complications are the addition of a bacterial infection of the nasopharynx, which causes severe forms of sore throat, and the development of the icteric syndrome during an inflammatory process in the liver.

Much less often, as a complication, this virus develops diseases of otitis media, peritonsillitis, sinusitis, inflammation of the lungs (pneumonia).
Splenic rupture is one of the most dangerous complications of infectious mononucleosis. This pathological process is noted in 0.1% of patients, but it entails a life-threatening condition — extensive abdominal hemorrhage and requires immediate surgical intervention.

The development of a secondary infection process against the background of the underlying disease is most often triggered by pathogenic microorganisms of the staphylococcal and streptococcal groups. Other types of complications include meningoencephalitis, interstitial pneumonia with the formation of infiltrates in the lung tissues, liver failure, severe hepatitis, hemolytic type of anemia, neuritis, polyneuritis, cardiac complications and so on.

The overall prognosis for recovery is favorable with appropriate and timely treatment. In the absence of treatment, incorrect diagnosis or distortion of the doctor’s prescriptions, not only the development of terrible complications and consequences of the disease is possible, but also the transition of the acute form to a chronic viral infection.

Among the long-term effects of infection with Epstein-Barr virus also distinguish the development of oncological diseases (lymphomas). This disease can occur against the background of a sharp decline in immunity, however, the presence of infectious mononucleosis in history, according to research, does not play a significant role, the presence of a virus in the body is sufficient (virus carrier). However, clinicians state that the chances of such a consequence are extremely slim.

For 6 months or more, depending on the severity of the course of the disease, fatigue may be observed, the need for more frequent and longer rest. Children are recommended daytime sleep or “quiet time” regardless of age, a sparing diet, no pronounced physical and psycho-emotional stress, observation by a hepatologist. Routine vaccination is prohibited during the recovery period.

Prevention of infection by contact with a patient with infectious mononucleosis

The isolation of a virus into the environment by a sick child or an adult does not end with recovery, therefore quarantine and additional means of protection in the acute period of mononucleosis are not recommended. It goes without saying that you should avoid visiting houses where infection is recorded, but there are no specific means and measures that reduce the likelihood of being infected with Epstein-Barr virus.

The general preventive principles include strengthening the body’s defenses: good nutrition, sports, hardening, adherence to the day regimen, a reasonable alternation of loads and rest periods, reducing the amount of stress, supporting vitamin therapy (if necessary).

Preventive consultations with a pediatrician and narrow specialists will allow timely detection of violations and abnormalities in the work of organs and systems, which reduces the likelihood of serious complications and the consequences of any disease.

Headache in temples: key causes of the disease

Whooping cough: causes, treatment and prevention of the disease