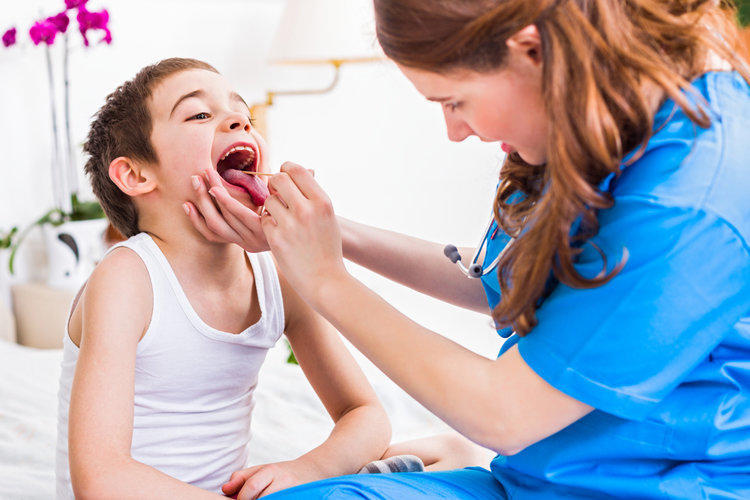 The word laryngitis has come to us from the ancient Greek language, in which it means “larynx.” The disease itself is an inflammation of the mucous membrane of this organ, provoked by one of the following reasons:

In modern medicine, there are two classifications of laryngitis: according to the shape and intensity of the flow.

Laryngitis classification according to the flow

Classification of laryngitis according to flow intensity

The first and most striking manifestation of laryngitis in children is hoarseness. In addition, the initial stage of the development of the disease is accompanied by a dry cough, painful sensations when swallowing and difficulty breathing.

Also, the following symptoms indicate the development of laryngitis:

Symptoms of laryngitis in newborns and infants

If older children themselves can complain about discomfort in the throat, pain symptoms and other causes of the disease, then with the smallest everything is more complicated. They cannot express their problems verbally. Therefore, babies signs of laryngitis need to look out visually. Parents should be alerted to the moodiness, anxiety and general lethargy of the child, wheezing during his screaming and difficulty breathing, accompanied by whistling and noise, as well as cough and heavy discharge from the nose. All this is a reason to consult a doctor to accurately diagnose and prevent the development of complications.

Symptoms of croup development in laryngitis

Speaking of laryngitis, one can not fail to mention its complication as croup. This term refers to the respiratory pathology in children, which develops due to a significant narrowing of the laryngeal lumen. In most cases, the croup occurs at night and the attack looks rather intimidating. The child complains of difficulty breathing, the sound of which is accompanied by many unusual sounds. In some cases, cyanosis may appear on the body, which indicates insufficient saturation of blood with oxygen.

The reason for this is the development of inflammation of the larynx. In the narrowest part of this organ, the subglottic space, the lumen becomes so small that it begins to impede the breathing process. It happens at night because the accumulated mucus flows to this place, drying out there because of insufficiently humid air in the room and a sufficiently high temperature. According to statistics, croup, as a consequence of laryngitis, occurs in every second child. Therefore, when you hear a diagnosis of laryngitis from a pediatrician, you need to be prepared for the fact that already the next night the child begins to develop respiratory pathology.

The first and most correct step in this development of laryngitis will be an immediate emergency call and hospitalization of the child. Independently, the croup can be overcome by abundant moistening of air and cooling to 18 degrees of temperature in the room where the patient is located. Ideally, the child should be taken to the bathroom and open the faucet with cold water. After that, the symptoms of croup quickly begin to decline.

Doctors note that croup, despite its visual complexity and problems, does not pose a serious danger. Lack of panic in parents and simple, correct actions in most cases allow to overcome this complication even before the arrival of doctors.

Clinical diagnosis of laryngitis in children

Diagnosis and treatment of laryngitis are carried out by a pediatrician who, if necessary, consults with an otolaryngologist. The complex clinical diagnosis of this disease consists of such studies:

On the basis of all these data, the pediatrician makes the final diagnosis, determines the tactics of treatment and decides on the need for hospitalization of the child. Inpatient treatment for laryngitis is necessary in the following cases:

Treatment of laryngitis in children

The treatment of laryngitis is based on three main areas:

When inflammation of the larynx, the child must implement a certain lifestyle. The main thing is bed rest and the maximum limitation of voice activity. It is clear that it will not be possible to make the child remain silent for a week, but you need to try so that, if necessary, he speaks in a whisper. At the same time, the larynx is restored fairly quickly, and the likelihood of development of irreparable defects of the vocal cords, which are still being formed in a child, tends to zero.

The air in the room where the child is located should be cool and important. The optimum temperature is +18 Celsius degrees, humidity – 70 percent. To ensure these indicators, we ventilate the room, if necessary, reduce the intensity of the heating devices and use a humidifier.

Food during laryngitis should be such as not to irritate the throat. Not sour, not hot, not cold. The throat needs full rest. Drinking well, also not annoying, should be as copious as possible. It allows you to quickly go through the stage of dry cough and reduce the effect of toxins on the body.

When laryngitis in children, in most cases, a complex of drugs is used to alleviate the symptoms of the disease. Conventionally, they are divided into four groups of symptoms, which they eliminate:

Antibiotic use in children with laryngitis

Antibiotics in children’s laryngitis treatment regimen are rarely used. The main reasons for their appointment are the bacterial nature of the inflammatory process and the high level of intoxication of the child’s body. At the same time, laryngitis of bacterial origin is a rather rare phenomenon, as is the use of antibiotics for this disease.

Precedents are also known when antibiotics were prescribed for laryngitis, even without the necessary prerequisites. This is done for reinsurance from the development of complications. But in medicine, such a move is considered redundant, and the benefit of it does not compensate for the likely harm.

If the prerequisites for the use of antibiotics for laryngitis in a child are present, then in most cases the drugs used are characteristic of other infectious diseases: penicillins, cephalosporins and macrolides. The last two groups are used for individual intolerance to penicillin drugs, or when there are other reasons for this.

It has been noted above that with laryngitis the most important factor in recovery is moist air. That is why inhalation is recommended for this disease. They need to be carried out on special equipment in a hospital, or on a home inhaler. Breathing steam, especially a child, is not necessary, as this can lead to burns of mucous membranes.

Of the preparations for inhalation with laryngitis, a solution of soda (a teaspoon per glass of water), Borjomi and Essentuki mineral waters, herbal tea with chamomile and mint are recommended. Of the drugs for inhalation are often recommended Lasolvan and Sinupret.

Inhalation of children with laryngitis is prescribed twice a day. The procedure should be carried out between meals. It is recommended during the inhalation and half an hour after it not to talk at all, so that the effect was maximum.

Of the other physiotherapy procedures for laryngitis in children under inpatient treatment are: UHF therapy, electrophoresis with effects on the larynx, ultraviolet irradiation and microwave exposure. All these procedures have a positive effect on the course of laryngitis, effectively enough removing the main symptoms of the disease.

Traditional medicine for such infections are also aimed at overcoming its symptoms. The most effective method is gargling. To do this, use decoctions of plants that have a natural expectorant effect, as well as antiseptic and anti-inflammatory effects. In particular, boiled beet juice is effective for gargling. In addition, it is useful to gargle with laryngitis honey dissolved in boiling water (teaspoon per glass of water). After cooling the resulting product, you need to use it three times a day.

It is useful to apply other methods of warming in acute laryngitis. In particular, children often make mustard baths for their feet and put mustard plasters on their backs, and put compresses on the neck area for warming up for the night. Using these procedures, the recovery of the body is much faster, and the symptoms of laryngitis have less discomfort.

But you need to remember that medical treatment of the disease is necessary and folk remedies should be used only as a supplement.

Possible complications on the background of laryngitis

Late treatment for laryngitis or its absence, as well as incorrectly chosen treatment tactics for laryngitis can cause the development of very serious complications. Acute laryngitis often develops its chronic form, and the following consequences may flow from it:

And if laryngeal stenosis in chronic laryngitis develops in almost 90 percent of patients, the remaining possible consequences are quite rare. Only a complete lack of adequate therapy and a number of matched aggravating factors can lead to them.
In addition, the complications of laryngitis also include its development in purulent forms. And they are often characterized by the following complications:

It is the purulent forms of laryngitis that are considered the most unpleasant and difficult in stopping, and everything must be done to prevent their development.

In fact, preventive procedures, specifically against the occurrence of this infectious disease, do not exist. Absolutely everyone is exposed to infections. But, the task of parents is to make the protective functions of the child’s body as strong as possible. First of all, we are talking about hardening. Wash your face with cool water, walk a lot, regardless of the weather, instill in children a love for sports. This will allow the body to independently confront many diseases.

In addition, a proper and healthy diet is especially important. In food for children, and for adults, healthy, natural products should prevail: vegetables, meat, seafood, dairy products. At the same time, it is necessary to limit the use of so-so-loved chips with soda, sweets and other things.

Another important factor in confronting infectious diseases is the correct microclimate in the room where the child lives. The room should be fresh: do not overheat the air to 22-25 degrees. 18 degrees is enough for a comfortable stay. In this case, you will forget about the sleepiness of their children. They will be more active time.

At the same time, it is necessary to control the humidity of the air. Few people attach importance to this nuance, but a device for measuring humidity and for humidifying the air should be in every children’s room, and not only a children’s one. Humidity at the level of 60-7 percent, coupled with the temperature indicated above, is the key to successful prevention of many childhood diseases.

Yes, no method of prevention against laryngitis can give you guarantees, but all these actions will increase the overall health of your children and save them from many problems.

Stomatitis in children: causes and treatment

HCG during pregnancy. Weekly rate: a table of indicators