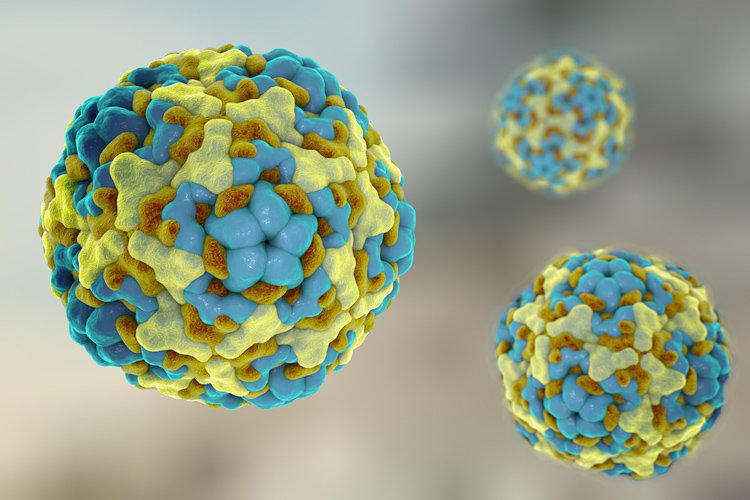 If you think that a person is most vulnerable to the action of the flu virus, then you are wrong. There is a group of viruses that infect hundreds of millions every year. They are called enteroviruses.While in most cases enterovirus infection does not pose a danger to life and health, however there are no rules without exceptions, in certain cases it is a threat.

Enteroviruses are a whole group of viruses belonging to the picornavirus family. All such viruses are RNA-containing. This means that their genetic information is contained in the RNA molecule, and not in the DNA molecule, as in the vast majority of other living things, including viruses.

There are several types of enteroviruses, of which echo viruses and Coxsackie viruses should be distinguished. In addition, polioviruses that cause poliomyelitis belong to the genus of enteroviruses. However, we will not consider polio due to the specificity of this disease.

There are also viruses that are not in any group. In total, there are approximately 70 strains of viruses of the genus Enterovirus, but 70% of the diseases are caused by only 10 strains.

Coxsackie viruses are several serotypes of viruses belonging to three species of the genus Enterovirus: A, B and C. Coxsackie type A viruses cause such severe enteroviral diseases as herpangina, hemorrhagic conjunctivitis, aseptic meningitis. Coxsackie B viruses are even more dangerous as they can cause myocarditis, pericarditis, and hepatitis.

Ehoviruses represent a great danger to newborns, as they can cause myocarditis, meningitis and hepatitis, which often leads to the death of babies. In older children and adults, infection with echoviruses causes the disease to occur without complications. Interestingly, when the ehovirus was first discovered, scientists named it the orphan virus (Orphan Virus or Enteric Cytopathic Human Orphan Virus, hence the abbreviation ECHO), since it was believed that he was not responsible for any disease. p>

All types of viruses that cause enterovirus infections are fairly resistant to external influences and can exist for a long time in the environment. They are able to withstand freezing. In addition, they feel good in an acidic environment.

It is this circumstance that causes the fact that viruses feel good in the gastrointestinal tract – after all, the hydrochloric acid contained in the stomach does not kill them. Thus, they can be attributed to intestinal viruses, but the symptoms they cause are far from always limited to gastrointestinal disorders.

There are viruses, however, and weak points. They are quite sensitive to heat. At a temperature of + 50 ° C, they lose their disease-causing properties, and at a temperature of + 70 ° C – die. Effectively kills viruses and ultraviolet radiation. Viruses are also susceptible to the effects of some disinfectants (chlorine compounds, hydrogen peroxide, potassium permanganate, formaldehyde). However, ethyl alcohol affects the viruses very little. Antibiotics and viruses are also ineffective.

The spread of enterovirus infection

There are two main reservoirs in which viruses live – this is the natural environment, in particular, water bodies and the earth, and the human body. Thus, the source of infection for a person can serve as another person, as well as surrounding objects, water and food.

Enteroviruses are transmitted in different ways. The most common ones are:

A proven fact is the possibility of mother infecting her child in the womb.

A feature of enterovirus infections is that they are most common in the summer and autumn months, and not in winter or spring, when major outbreaks of disease occur.

The mechanism of the action of viruses

Viruses enter the body almost always through the oral cavity. After this has happened, the pathogens invade the tissues of the body and begin their reproduction. A feature of viruses of the genus Enterovirus is that they can use almost any cell for this purpose. However, most often viruses infect intestinal mucous tissues, the epithelium of the oral cavity, lymphoid tissue. It is for this reason that the symptoms associated with the gastrointestinal tract and upper respiratory tract are usually observed with the disease. However, nerve tissue, blood vessels, and muscles often suffer as well. Viruses spread through the body in a hematogenous way – with blood flow.

Approximately 80-90% of cases of enterovirus infections are children. Half of them are children of preschool age. The disease is most dangerous for children under 3 years old. Infants get sick infrequently, as they are usually protected by antibodies produced from mother’s milk. But if the infection still happens, then enterovirus disease in infants will not be easy to cure.

Enterovirus infection in children can take a variety of forms – from intestinal and respiratory to damage of the nervous system and heart. In particular, diseases such as herpes sore throat, viral meningitis, pemphigus of the oral cavity, many cases of conjunctivitis, cystitis, encephalitis, myocarditis and pericarditis are caused by enteroviruses. In addition, enterovirus infection increases the likelihood of developing diabetes mellitus type 1 in children.

In 9 out of 10 cases, the disease proceeds without any symptoms or is only manifested by slight indisposition. However, this is characteristic only for adults with sufficiently strong immunity. In children (especially those who are not immune to viruses), the infection can take severe and sometimes severe forms.

The incubation period for an enterovirus infection is between 2 and 14 days.

The main organs that infect viruses:

Enterovirus disease in children often occurs with a predominance of respiratory symptoms. In this case, the following can be observed:

When an enterovirus infection of a gastrointestinal variety occurs, the following symptoms are common:

Possible symptoms of a general nature include:

Also, from the symptoms, rash of herpes type can occur, in the form of a rash or small bubbles on the skin or mucous membranes (in the mouth, throat, in women – in the vagina).

Varieties of enterovirus infection in children

There are several varieties of Enterovirus, and the diseases that these viruses cause are different in their symptoms. Enterovirus fever in children is perhaps the most common type of disease, but other types of disease are quite dangerous for the health of the child.

Enterovirus fever is also often called the “summer flu” due to the fact that it is most often observed in the summer or autumn, in contrast to the real flu, more characteristic of the cold season. With the “summer flu” there is a characteristic acute onset. Manifestations of this disease include a complex of flu-like symptoms (body temperature up to + 40ºС, sore throat and muscles, headaches, conjunctivitis). The disease is accompanied by a number of acute intestinal disorders (nausea, vomiting). Typically, the fever lasts 3-7 days, in connection with which it is also called the three-day.

Herpes sore throat appears more often in children and is caused by the Coxsackie virus. The disease is accompanied by a rash of herpes type, located on the mucous membrane of the surface of the pharynx and tonsils. This disease also subsides within 3-7 days.

Viral pemphigus can occur in children of both preschool and primary school ages. It manifests itself as small fluid-filled bubbles located in the pharynx, on the palms, soles, and between the fingers. Fever in this form of the disease lasts 1-2 days. Typically, the disease is caused by Coxsackie Type A virus.

Enteroviral rash is usually caused by echo viruses or Coxsackie viruses. In this form of infection, a characteristic rubella-like rash is observed. It consists of bright red spots up to 4 mm in diameter, which are located on the face, neck, limbs and torso. Enteroviral exanthema usually affects children under the age of 5 years.

Caused by Coxsackie viruses. When pleurodynia can experience severe muscle pain in the lower and upper abdomen. The disease can easily be confused with some surgical pathology. It affects both preschool children and teenagers.

Enterovirus infection in children often gives a complication in the form of serous meningitis. This type of meningitis is an inflammation of the meninges, accompanied by the production of serous exudate. In 70-80% of cases, the disease is caused by Coxsackie viruses and echo viruses. The manifestations of meningitis include headache, high fever, increased and painful sensitivity to various stimuli (skin touch, bright light and loud sounds). There may be delirium and convulsions.

Due to the characteristics of viruses of the genus Enterovirus, the clinical diagnosis of the disease has its own characteristics. To date, there is no specific treatment for enterovirus infections in children, so the aim of diagnosis is to separate them from infections that have a similar therapy — viral (flu, herpes) and bacterial. Also, the diagnosis has a certain research value. However, in most cases, diseases caused by viruses are transient and the patient has time to recover even before the analysis results are ready.

There are several diagnostic methods – serological analysis, analysis of CNR and some others.

Treatment of enterovirus infection in children

In most cases, enterovirus infections are treated with symptomatic means. For example, in case of a disease that manifests itself in the form of an intestinal infection, treatment includes the administration of enterosorbents that absorb viruses and toxins in the gastrointestinal tract. Also, when persistent diarrhea accompanying enterovirus infection, it is necessary to ensure that the body is not subjected to dehydration. That is, the patient should use as much liquid as possible or take rehydration solutions. In addition, excessive drinking can reduce the signs of intoxication.

If there is fever, signs of inflammation, severe pain, anti-inflammatory drugs are taken to treat these symptoms. As a rule, these are non-steroid type drugs (paracetamol , ibuprofen). Also in some cases (for myocarditis, meningitis), steroids may also be prescribed by a doctor. In addition, in case of severe enterovirus infection and weakened immunity, the doctor may prescribe immunomodulators or drugs with interferon. Treatment of serious complications such as myocarditis, encephalitis and meningitis is carried out in the hospital.

There is no specific prevention effective specifically against Enterovirus viruses. It is necessary to observe the preventive measures common to all types of infectious diseases. This is, above all, the observance of personal hygiene rules – regular washing of hands, fruits and vegetables, heat treatment of meat and fish, regular wet cleaning of the room. You should also avoid swimming in polluted water.

Despite the fact that children are mostly susceptible to severe forms of enterovirus infections, adults can also become infected with viruses. Without becoming ill, they can be dangerous as asymptomatic carriers of pathogens. Therefore, adherence to preventive rules to avoid infection with enteroviruses is mandatory for both children and adults.

Headache in temples: key causes of the disease