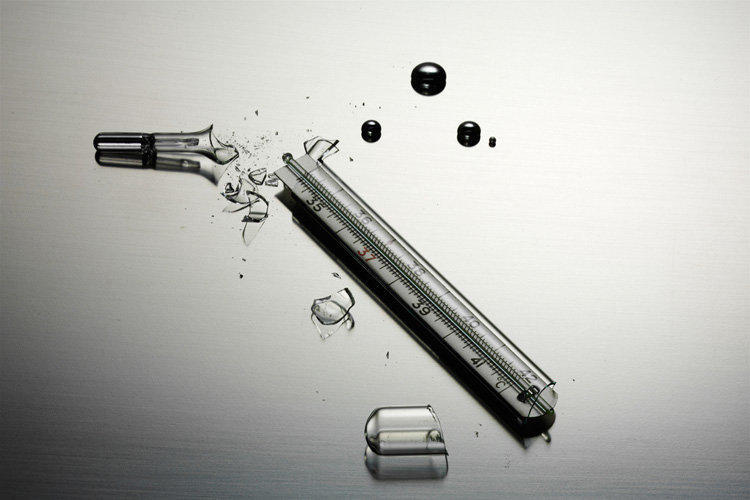 It is hardly possible to find a house or apartment in which there is no thermometer for measuring body temperature – an indispensable device for any indisposition. And, for the most part, thermometers in houses in the post-Soviet space are mercury. Although electronic and infrared temperature meters have been on the market for a long time, their older brethren are rather slowly squeezing out.

Older people are skeptical of innovations and believe that only a mercury thermometer can accurately measure the temperature, and the younger generation uses what they inherited and changes the thermometer to modern only when the mercury … is broken.

Of course, this is an aggravated picture. To the mercury thermometers have long been treated with care, knowing that it can not be broken, because inside – a very dangerous substance – mercury. But the thermometers beat and to be aware of the list of actions to be taken in such a situation is to be ready to overcome it with minimal consequences.
First you need to learn the basic rules for handling a mercury thermometer that minimize the likelihood of its breaking:

The danger of a broken thermometer

Mercury, through which temperature is measured, is the 80th element of the periodic table and belongs to the first class of danger, representing a cumulative poison. This metal, which in the range of -39 – +357 degrees Celsius is in a liquid state. That is, it is the only metal that at room temperature is not in solid, but in liquid aggregate form. In this case, already from the mark of +18 degrees, mercury begins to evaporate, releasing extremely toxic fumes. And it is this fact that makes a broken thermometer an extremely dangerous occurrence.

The amount of mercury in a normal thermometer is about two to five grams. If all mercury evaporates in a room with an area of ​​18–20 square meters, then the concentration of mercury vapors in the room will be about 100 milligrams per cubic meter. And this is 300 thousand times more than the maximum permissible concentration for residential areas, since with normative indicators the level of mercury in residential premises should not exceed 0.0003 milligrams per cubic meter. Of course, this is more theoretical calculations. Natural ventilation of rooms will never lead to such an excess, and very high temperature is needed to evaporate all mercury. But without proper actions, a broken thermometer will lead to an increase in the MPC of mercury vapors by 50–100 times, which is also quite dangerous.

It should be noted that mercury tends to accumulate in the body. That is, not having collected it carefully, the consequences of inhaling mercury vapor can manifest themselves after a few weeks, when you already forgot about the broken thermometer. In this case, the diagnosis of the causes of indisposition will be very difficult.

If a thermometer has broken, spilled liquid metal is unlikely to bring critical consequences, if we mean by this concept paralysis, irreversible changes in the systems of vital activity and death. Breathing in mercury vapor from a broken thermometer can manifest the following symptoms:

Late assistance to the victim entails an increase in the symptoms of poisoning, which is manifested by the following markers:

These symptoms – a reason for immediate hospitalization. Without qualified medical care, the consequences can be critical, even death.
Particularly dangerous mercury vapor for children and women during pregnancy. In the first category, even short-term inhalation of mercury vapors can lead to serious problems in the work of the kidneys, and in pregnant women, this situation can provoke intrauterine damage to the fetus. Therefore, children and pregnant women, even without the above symptoms, after just staying in the room where the thermometer broke, should see a doctor.

The emergence of symptoms of mercury vapors poisoning is the promise to immediately call an ambulance. Before her arrival, the victim should be given the maximum possible amount of water to drink, which flushes the body and it is very desirable to take the drug Polysorb (price – from 120 rubles, depending on the dosage). It belongs to the class of enterosorbents and is recommended for use in acute poisoning with poisons.

This is a rather unique means: the sorption capacity of Polysorb exceeds 300 milligrams per gram of powder, it begins to act a few minutes after taking it and Polysorb has no contraindications for age.

Dosage of the drug is carried out depending on the person’s weight according to the following table:

A mercury thermometer broke: what to do?

But, in fact, a crashed thermometer with correct and well-adjusted actions is nothing more than an unpleasant situation that can be resolved on its own.
First of all, if the thermometer broke, we recall its physical properties and cool, if possible, the room to 18 degrees. At this temperature, mercury does not evaporate. Often, you just need to turn off the heating, turn on the air conditioner and open the window. Indoors with spilled mercury should not be a draft that can crush mercury balls, so the window opens only one.

Spilled mercury resembles small metal balls. If they are on the floor – to collect them is not difficult. Those that are larger – collect a sheet of paper and drop them into the bank. Those that are smaller than the scotch tape, which are then also dropped in the potassium permanganate. Next, carefully, preferably with a flashlight, inspect the places where mercury could roll – cracks, corners, baseboards. We roll the balls out of them with a metal needle, or we suck them in with a pear for douching. All this is also sent to a container with potassium permanganate, as well as the remains of a thermometer. We tear off the plinth and also pack it in a tight bag for recycling. In the light of the flashlight, mercury balls will give off a distinct metallic glow, so that they will all be clearly visible on a flat floor.

After collecting all the mercury, we wash the floor and all the surfaces where the mercury could get, soap and soda solution, clothes, gloves and shoes are folded into a bag that is tightly tied and we call the Emergencies Ministry on the phone number 112. They will tell you where to dispose of. collected mercury and things that came into contact with it.

We wash ourselves thoroughly, rinse the oral cavity several times with soda solution and take several tablets of activated carbon for disinfection.

The room where the thermometer was broken is closed from visits for a week, leaving one window open. We regularly disinfect the floor with a soap-soda solution.

Much more difficult is the situation when mercury from a thermometer hit a tissue surface or if a mercury thermometer broke in a place where mercury cannot be collected: indoors with slots in the floor or where a lot of things are laid out. In such cases, it will be impossible to do without the help of specialists. In such a situation, the first step will be the removal from the premises of people and animals. Then you need to open one window, eliminating the appearance of a draft, and call the laboratory service specialists who work at the sanitary epidemiological stations and at the Emergencies Ministry units. With the help of special equipment, they will be able to determine the concentration of mercury vapor, as well as things that need to be disposed of. Most likely, you will have to say goodbye to everything that mercury could get into.

What not to do if the thermometer crashed

It is also necessary to remember the list of actions that in no case can be done in a situation when a thermometer has broken in your house:

And the most important thing: in case of a broken thermometer, in no case should you give in to panic. In such a situation, it is your main enemy. If you are worried about the incident and cannot remember what you need to do, just dial the number of the Emergencies Ministry unit 112. There they will always provide you with a qualified consultation and tell you in detail what to do if the thermometer crashed. And in difficult cases, they will be sent to the appropriate services, which will eliminate the consequences of what happened.