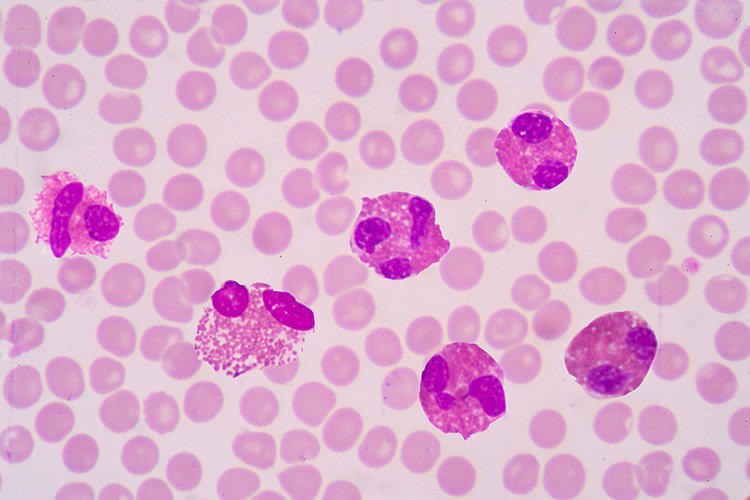 Leukocytes in the blood of a person are divided into several subspecies, one of which is eosinophils. Their characteristic features are the lobular nucleus, as well as the ability to turn red in color under the action of the eosin substance, from which this group of white blood cells got its name.

Eosinophil measurement is performed either in absolute terms per milliliter of blood, or as a percentage of the total number of white blood cells. The second method is more common and it is commonly used in laboratories.

The level of eosinophils in the blood of an adult does not depend on sex or age. As a percentage of both men and women, an indicator of 1–5 percent of the total number of leukocytes is considered normal, which, in absolute terms, is equal to 120–350 eosinophils per milliliter of blood. And it is quite natural that the question “eosinophils are higher than normal, what does this mean,” arises.

In children, the normative number of eosinophils, or rather the upper bound of the norm, varies slightly in age, which is clearly shown in the following table:

When processing the analysis with elevated levels of eosinophils, it is also necessary to take into account daily fluctuations of this indicator: in the morning and in the evening natural growth of eosinophils is observed at 15 percent of the norm, and in the first phases of night sleep, the level can rise immediately by 30 percent. If, in humans, eosinophils in their natural state are close to the upper limit of the standards, such fluctuations may entail recommendations for further examination, although there will be no real prerequisites for this.

In hematology, a condition in which eosinophils are elevated in an adult or in a child is indicated by the concept of eosinophilia. In itself, this condition is not a disease, but acts as a kind of marker of pathological changes in the body. There are three forms of eosinophilia:

The reasons for the increased level of this type of white blood cells can be a number of prerequisites:

Following the detection of a high eosinophil count in the blood, the doctor prescribes an additional diagnosis, which includes a biochemical blood test, an ultrasound examination of the abdominal cavity organs and a stool collection to determine the presence of worms eggs. In addition, the release of eosinophils beyond the norm entails immediate consultation with an allergist, who must confirm or rule out the presence of an allergy – a prerequisite to the development of eosinophilia.

The causes of eosinophilia in children are somewhat different from adults and have a fairly clear age classification.
In children up to half a year, eosinophils outside the normative parameters are in most cases provoked by the following reasons:

Between six months and three years of age, eosinophilia in children develops due to the following prerequisites:

At the age of three years, the increased rate of eosinophils in the blood of a child is mostly a manifestation of infectious diseases and allergic manifestations:

Eosinophils in the blood with excess of the norm in combination with an increase in other indicators in the blood test are quite indicative. In particular, high eosinophils and monocytes are characteristic in the presence of an infectious process (this combination is indicative of mononucleosis), as well as in viral and fungal diseases.
If eosinophilia is recorded against high leukocytes, this may indicate the presence of worms, the development of a viral infection on the background of allergies and the beginning of scarlet fever.

A decrease in the level of eosinophils in the blood below the standard indicator is indicated by the term eosinopenia. At the same time, there is a decrease in this indicator down to zero, which is a very dangerous condition. If the eosinophils are practically absent in the blood, then this may indicate the development of acute appendicitis, typhoid fever or diphtheria, as well as the unfolded form of leukemia.

In the case of an uncritical fall of this indicator, eosinopenia may be due to a person’s postoperative condition, a consequence of injuries and burns, sepsis, or evidence of the onset of an infectious disease.

Also, clinical studies show that consistently low eosinophil levels are characteristic of people with Down syndrome and people with chronic fatigue syndrome.

What to do if the thermometer broke at home