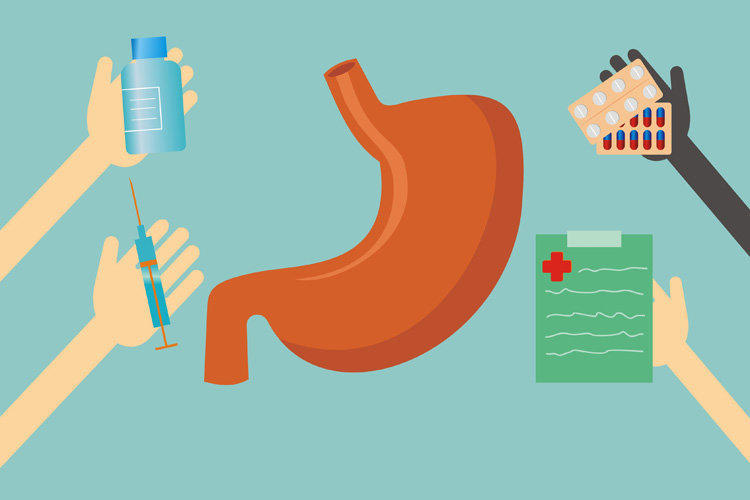 Omeprazole is a modern drug used to treat people suffering from gastric ulcer and duodenal ulcer, as well as other diseases directly or indirectly associated with increased acidity of gastric juice. Omeprazole has proved itself well and has a reputation as a reliable and effective means for gastroenterologists. In addition, the popularity of the drug contributes to its affordability.

The principle of the drug is based on blocking the production of hydrochloric acid by cells of the gastric mucosa. As you know, the main active ingredient in gastric juice is hydrochloric acid. The acidity of the stomach is maintained by special proteins contained in the cells of the gastric mucosa – proton pumps that regulate the movement of hydrogen ions (protons) through cells.

Omeprazole belongs to the class of proton pump inhibitors (suppressors). These compounds reduce the activity of proton pumps, thereby reducing the acidity of the gastric juice and increasing the pH. The emergence of proton pump inhibitors has allowed medicine to reach a new level in the treatment of ulcers and reduce the number of surgical operations. The first such drug was Omeprazole. It was developed in 1988 by the Swedish pharmaceutical company Hässle and still retains its position. As practice shows, drugs of this type are more effective than agents that reduce the acidity of gastric juice due to the neutralization reaction.

In addition, omeprazole has another useful property. The substance contained in it inhibits reproduction of Helicobacter pylori bacteria, whose activity contributes to the development of peptic ulcer. However, antibiotic therapy with medication is recommended in conjunction with antibiotics.

Description of the drug Omeprazole

Omeprazole looks like a white crystalline powder. Chemical structure refers to benzimidazole derivatives. It has a weak alkaline reaction, it is well soluble in alcohols and very poorly in water. Omeprazole is a prodrug. This means that the substance contained in it, does not possess healing properties by itself, however, it acquires these properties after entering the internal environment of the body.

The effect of the drug comes quickly enough – within 1 hour and lasts about 23 hours. Omeprazole 20 mg lowers the pH in the stomach to a value of 3 and keeps it at that level for about 17 hours. During the course of treatment with a dose of 20 mg daily maximum effect is achieved for 3-4 days. After the course, the effect lasts a few more days. The drug can be administered to adults and children, starting with 5 years. Elderly patients can take the drug omeprazole without dose adjustment.

Diseases that are treated with the use of the drug include:

The most important contraindication is intolerance to the active substance. In addition, the drug is contraindicated in pregnant women and nursing mothers. It is proved that taking the medicine in the first trimester can lead to fetal malformations. Therefore, the drug can be taken in the case of pregnancy only if there are no alternative treatments. In addition, the substance in the composition of the drug, penetrates into the mother’s milk. It is not recommended to take the drug in case there are suspicions of gastric and duodenal cancer.

Among the side effects should be noted that the drug contributes to the leaching of calcium from the bones. Therefore, it is not prescribed for osteoporosis. Or, treatment should be accompanied by calcium supplements. Another contraindication is Salmonella infections, because Omeprozole can increase their reproduction. Also, the drug is prescribed with caution in liver and kidney failure.

As can be seen, Omeprazole has many contraindications, so only a doctor can prescribe drug treatment. Pharmacies prescription drug.

Side Effects of Omeprazole

Omeprazole has few side effects. They are usually caused by prolonged use of the drug (more than 2 months). These include nausea, diarrhea, constipation, bloating or abdominal pain, headache and dizziness.

Rare effects of the drug:

It is recommended to take before meals or with meals, preferably in the morning. The medicine is washed down with a small amount of water. When using omeprazole in the form of capsules, they cannot be chewed. The usual dosage is 20 mg per day for 1 reception. However, in some cases, for example, with resistance to anti-ulcer drugs, it can increase to 40 mg. The duration of the course of treatment and the method of application depend on the disease. In case of peptic ulcer the course of treatment usually lasts 4 weeks, in case of gastritis, heartburn – 2 weeks. Do not use the drug for more than 2 months. With a long course of treatment should take a break of several months. When prescribing Omeprazole, the instructions for use can be adjusted by the doctor depending on the circumstances.

Analogs of the drug Omeprazole

Omeprazole analogs are usually drugs with the same active substance. In fact, this is the same drug, but with a different name. These include:

There are other substances from the class of proton pump inhibitors with a similar effect, for example:

Drugs of this class differ from each other in duration and activity of action, interaction with other drugs, the number of contraindications and some other parameters.

Omeprazole changes the acidity of the gastric environment, and therefore its use may affect the action of other drugs, depending on a certain level of acidity. These drugs include ketoconazole, itraconazole, ampicillin. In addition, omeprazole stimulates an increase in the concentration of certain drugs in the blood (warfarin, diazepam, phenytoin) and slows the removal of tranquilizers from the body. Enhances the effect of anticoagulants and anticonvulsants. Compatible with another type of anti-ulcer drugs – anatacides.