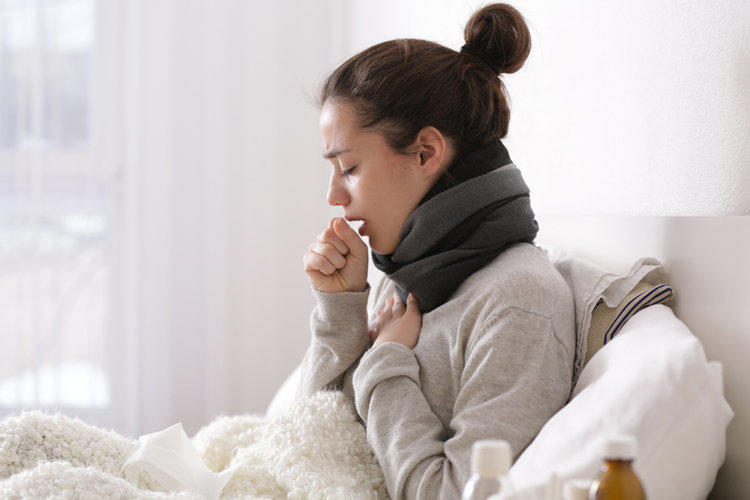 One of the most common diseases of the human respiratory system is bronchitis. This disease is an inflammatory process that affects the bronchi. Bronchitis appears due to infection: in most cases of viral, less often of bacterial origin. In the international classifier of diseases, bronchitis is presented in two forms: acute and chronic. They differ in etiology, pathogenesis and necessary therapy.

The main symptom of bronchitis is cough. In the first days of the disease, it is dry with strong night attacks. Because of the cough, the patient often cannot sleep properly and suffers from physical discomfort. After a few days, the cough becomes wet and, with the right treatment tactics, bronchitis disappears in 10 days. Quite often there are cases when the cough, in the form of a residual phenomenon after bronchitis, lasts much longer than the disease itself. This is due to the fact that the process of recovery of the bronchi after the inflammatory process is quite long.

Anxiety should cause only a cough that lasts more than four weeks. In such cases, consult a pulmonologist, who will determine the presence of third-party causes of cough. In addition, third-party inclusions in sputum, especially blood, should alert for bronchitis. They should be the reason for an immediate visit to the hospital, where they will be examined for tuberculosis and lung cancer, for which blood in the sputum is a rather characteristic symptom.

Considering the issue of treatment for bronchitis, first you need to identify two important points:

At the same time, it is drug therapy for bronchitis that is quite simple. By itself, it does not require any complex drugs or procedures. The main thing that requires this disease: the correct identification of the causative agent of the inflammatory process and the form of the flow.

The use of antibacterial drugs for bronchitis causes a lot of debate. But official medical protocols state that the use of antibiotics to treat this disease is necessary in two cases:

The list of antibiotics here is classic for bacterial infections: penicillins, cephalosporins, macrolides. The choice depends on the individual characteristics of the patient.
In most cases, if the bronchial inflammation is of viral origin, antibacterial drugs do not have the necessary effective action. In addition, they can cause the development of broncho-obstructive syndrome – bronchial obstruction caused by mucosal edema.

The main symptom of bronchitis, which indicates the need for the use of antibiotics, is sputum with purulent patches. If present, the doctor prescribes an additional study, the results of which prescribe an antibacterial agent. But in no case with bronchitis, an antibiotic can be prescribed independently. Probable harm from its use can significantly exceed the expected effect.

The inflammation of the bronchi in the acute form is almost always treated at home and requires only local preparations. Antibiotics for bronchitis are not a key drug.

The fact that bronchial inflammation is triggered by a viral infection itself hints at the need to use antiviral drugs to treat this disease. But the question of the use of drugs in this group is very, very debatable. Many doctors believe that antiviral drugs with proven effectiveness does not exist and to fight viruses, the body simply needs to create optimal conditions. In some ways they will be right. Another group of doctors says that viruses should be suppressed with antiviral drugs, and without them the disease cannot cope.

Two drugs are used for viral infections: interferon and oseltamivir. At the same time, no one takes them in a pharmacy without a prescription and does not drink without a medical prescription. The use of antiviral drugs is indicated for the treatment of chronic bronchitis, in most cases with concomitant hospitalization.

The truth is, in fact, somewhere in the middle. With a normal course of bronchitis is overcome without antiviral drugs, as well as without antibiotics. If the disease is accompanied by complications or there are individual prerequisites, the use of drugs in this group can be justified and necessary.
Now, about what you really can’t do with bronchitis.

Bronchitis always begins with a strong and dry cough. Therefore, the only group of drugs that are really necessary for inflammation of the bronchi is expectorant.
In medicine, this group of drugs is divided into two subgroups according to the method of influence on the body:

This subgroup is also called sekretomotornymi means. The action of stimulating drugs is aimed at irritation of the gastric mucosa, due to which the enhanced work of the cough and vomiting centers of the medulla oblongata is triggered. The consequence of this is an increase in the production of fluid secretion in the bronchi and the enhancement of cough reflexes.

The main drugs in this group are thermopsis herb, a range of essential oils, ammonium chloride, and others. It should be noted that drugs to stimulate expectoration have a fairly short-term effect, and overdose threatens with vomiting, nausea, nasal congestion and tearfulness.

A subgroup of these drugs, which are also called mucolytics, dilutes sputum, while not leading to its increase in volume. This effect is achieved due to the fact that disulfide bonds are broken in acid mucopolysaccharides. The main prerequisite for their use is viscous sputum, which is produced in diseases of the respiratory tract, including bronchitis.

The most popular thinning agents are:

In principle, all these tools can be considered as analogues among themselves and the appointment of a specific drug is carried out solely because of the preferences of the doctor and the individual characteristics of the patient.

In addition to the aforementioned groups of drugs, the course of bronchitis may require the use of antipyretics. In most cases, bronchial inflammation is accompanied by only a slight increase in body temperature, at which the body is given the opportunity to cope with the problem itself. But if the temperature goes beyond 38 degrees, then classical ibuprofen or paracetamol should be added to drug therapy.

At this point, the drug treatment of bronchial inflammation ends. In the normal course of the disease, this disease does not require other medications, but at the same time it requires a special maintenance regime for the patient and physiotherapeutic procedures.

Lifestyle and regimen changes for bronchitis treatment and prevention

Asking how to quickly cure bronchitis, you need to remember: for bronchitis, the main condition for recovery is to create the most favorable environment for the natural restoration of normal functioning of the respiratory system.

The first and most important thing for bronchitis is moisture. At the same time, besides humid air in the room where the patient is, he needs to ensure the most abundant drink. Moreover, you can drink absolutely everything, except for soda: water, juices, herbal teas. The main thing is to have a comfortable drinking temperature.

To ensure sufficient humidity in the room, it is best to use humidifiers. If they are not there – hang wet towels on the batteries, spray water with a spray – do everything to increase the water content in the air.

Already these two rules will create favorable conditions for overcoming dry cough and start the process of sputum separation.

In addition, with bronchitis, especially in the first three days, bed rest and the absence of physical exertion are necessary. Small walks are allowed only with the first relief, and they should be carried out in places with clean air: in squares, parks, in the forest.

A separate item of the regime for bronchitis is a complete cessation of smoking. Inhalation of tobacco smoke is a provocative factor for dry cough and smoking with bronchitis can not only prolong the healing process, but also cause serious complications. By the way, doctors believe that inflammation of the bronchi is a great (if you can put it that way) reason to quit smoking.

Adhering to these simple rules, the treatment of bronchitis will take place as soon as possible and with the minimum of necessary medicines.

There are a lot of recommended physiotherapeutic procedures for bronchial inflammation. But there are three proven effectiveness among them:

There are only two contraindications for inhalation: high temperature and rapid heartbeat. But immediately after overcoming them, inhalation can be used. This is one of the most effective methods for inflammation of the bronchi.

Methods of breathing exercises in the pathologies of the respiratory tract, there are quite a lot. Regardless of who developed a specific set of exercises, they all have a positive effect on the rate of overcoming bronchitis. It is necessary to choose a suitable breathing exercises on your own or as recommended by your doctor The most popular are the methods of Strelnikova, Buteko, Koflera, as well as yoga and martial arts wushu.
Any set of exercises for the respiratory system puts the following goals at the forefront:

And the most important thing: when performing such exercises you need to remember – they should be carried out in the fresh air, which in itself has a positive effect on the state of the respiratory system organs.

Massage during bronchial inflammation is prescribed when the disease subsides: there is no fever, the cough has passed into the wet stage, there are no associated complications.
Pre-massage should be a very warm bath, which will soften the skin and allow you to spend some time in a room with one hundred percent humidity. Massage techniques for bronchitis, there are several. We describe them:

Finally, we note that the treatment of inflammation of the bronchi in the normal course is quite simple, but at the same time requiring the correct construction of the tactics of taking medications and the use of physical procedures. Therefore, ill with bronchitis, consult a doctor. He will tell you how to treat bronchitis at home, accurately determine the characteristics of the disease and select the therapy that will give the most effective result in a short time.