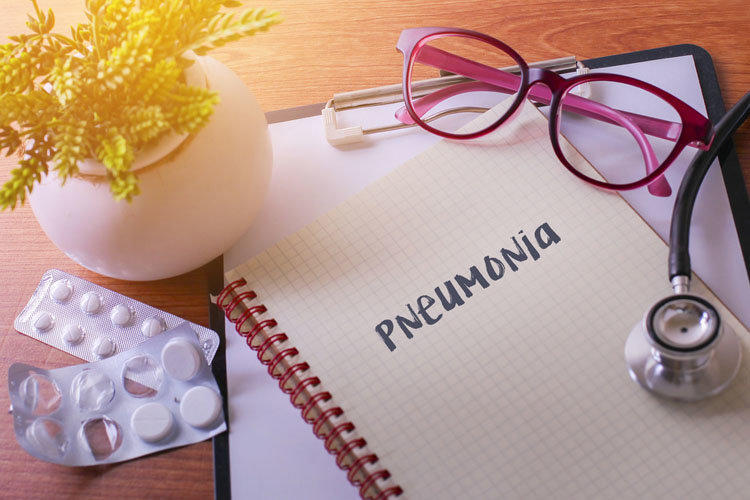 Pneumonia or lung inflammation refers to acute infectious diseases. The causative agents of pneumonia can be varieties of viruses, bacteria, fungi. There are also species such as aspiration pneumonia or paracannular pneumonia that develops around a nidus of cancer in the lung tissue. At the first signs of pneumonia, an urgent need to consult a doctor.

The inflammatory process in the lungs – a disease that can cause significant harm to health. Prior to the invention of antibiotics, mortality from pneumonia reached 80%. Currently, in different regions, death rates due to the development of pneumonia range from 5 to 40%, and the elderly are mostly affected.
Uncomplicated form of the disease with timely diagnosis and treatment can be cured in 10-14 days. Modern medicines help to avoid severe complications and cure almost any form of pneumonia without consequences. However, it must be remembered that for effective treatment and successful prevention of complications, a specialist should be engaged in the therapy of this disease.

Pneumonia is an inflammatory process localized in the lung tissues. In most cases, the causative agent is an infectious agent. Ways of infection in the body are different, most often it is airborne, less often – spread through the bloodstream.

Some microorganisms responsible for the development of inflammation of the lungs are constantly present in the human body. With the proper level of immune protection, the body successfully copes with such infections, while reducing the level of protective forces (hypothermia, the primary disease), the inflammatory process in the lungs develops.
Most often in the etiology of pneumonia there are diseases of the upper respiratory tract. In this case, against the background of cold symptoms, tracheitis, acute, chronic bronchitis , another source of infection in the respiratory organs develops an inflammatory process in the lungs. The occurrence of the disease can also be a consequence of the illness of other organs and systems, a complication after surgery, other situations that adversely affect the immune system.

Symptoms of pneumonia in adults and children

The symptomatology of the disease depends on the reasons that caused it, the patient’s age, his state of health. The disease is acute or develops in a worn form, may have classic symptoms or be asymptomatic, SARS. The most severe course of the disease with pronounced pulmonary complications is observed in elderly patients, people with weakened immune systems and children with their imperfect immune system.

The most frequent triggering factor of the inflammatory process in the lungs in the adult part of the population is hypothermia. The characteristic symptoms of pneumonia in such cases include the following manifestations that arise sequentially:

The picture of the disease may not correspond to the classical pattern of the disease. The clinical manifestations and severity of the disease largely depend on the type of pathogen of the inflammatory process. Thus, among the atypical pathogens known influenza virus H1N1, an infectious agent of “swine flu”, which causes a serious complication in the form of viral bilateral pneumonia, accompanied by significant lesions of the lung tissue with extensive foci of inflammation, acute respiratory failure.

With a high frequency, pneumonia develops on the background of acute respiratory infections, acute respiratory viral infections, accompanied by flu-like symptoms. The risk of pneumonia and the presence of other complications is significantly increased with an independent “treatment”, most often consisting in the administration of antipyretic drugs. This contributes to the spread of infection down the respiratory tract and the formation of infectious foci in the lungs. Thus, the prevention of pneumonia in infectious diseases becomes a full course of treatment and timely diagnosis.

Symptoms of pneumonia in children

The incidence rate in children correlates with age: babies up to three years old suffer 2-3 times more often (1.5-2 cases per 100 people) than children older than 3. Infants suffer from pneumonia more often due to aspiration of gastric contents during regurgitation , foreign bodies in the airways, birth trauma, malformations.
Symptoms of pneumonia in childhood also vary depending on the age, etiology and distribution of the inflammatory process.
At the age of one year, there are the following signs:

In older children with pneumonia, the symptoms are similar to manifestations of pneumonia in adults: fever, weakness, drowsiness, increased sweating, loss of appetite, loss of interest in favorite activities, pronounced general malaise, the development of respiratory failure is possible when extensive inflammation is involved areas of the lungs or the individual characteristics of the child.

The classification of the forms of pneumonia as a well-studied disease is based on several factors, which makes it possible to more accurately diagnose and more effectively treat pneumonia in patients.

Classification by condition of occurrence

There are community-acquired pneumonia and nosocomial, hospital pneumonia. Nosocomial is considered a form that develops in a hospital, clinic 48 hours after the patient is hospitalized for other reasons. This type of pneumonia is distinguished due to the characteristics of the course and treatment, as in the conditions of hospitals and hospitals often develop strains of infectious pathogens that are resistant to antibacterial therapy.

The aspiration form, which develops as a result of the contents of the oral cavity, nasopharynx, or stomach, as well as foreign particles in the form of solids. Bacterial pathogens that are in aspiration masses or objects develop and cause severe inflammation with purulent complications: the development of purulent sputum, difficulty in transporting it and significant damage to lung tissue.

Classification by volume of lung damage

Depending on the prevalence of the inflammatory process and the volume of lung tissue involved, there are several types of disease.

Focal form is characterized by a clear localization of the inflammatory process. Most often, this species develops as a complication of a viral disease. There is a dry cough with the transition to a wet form, high body temperature, pain when coughing, the presence of sputum with purulent patches.

Unilateral form of the disease

The process captures only the right or left lung, and can extend to a small segment or involve all lobes of the organ. Symptomatology depends on the extent of the lesion, the pathogen, the general condition of the patient, may be pronounced or asymptomatic.

Localization of foci of inflammation is noted in both the right and left lung. In this case, the inflammatory process may be segmental, lobar, or involve the entire body. The main difference is that both sides of the lung are affected, regardless of the extent of the lesion.

In this form, pneumonia is characterized by one of the most pronounced clinical pictures. Distinct external symptoms of the lobar form are a sharp increase in body temperature to the limit values ​​(40 ° C and higher), a pronounced pain syndrome, a characteristic yellow-orange shade of discharge of sputum.

The causative agent of lobar pneumonia is most often pneumococcal, and the timely prescription of antibacterial drugs (most often prescribed antibiotics of the penicillin series) brings recovery in both croupous and other forms of pneumococcal pneumonia.

The lung is an organ consisting of conditional lobes: there are three in the right lung, and two in the left. If one organ lobe is affected, then it is a lobar form, localization in two lobes means a biofee form, unilateral or bilateral. With the defeat of the two lobes of the left lung they speak of total pneumonia, two lobes of the right lobe – the subtotal form.

Types of inflammation characterize the vastness of the process and the severity of tissue damage. The more segments and shares involved, the more pronounced the symptoms of the disease.

Classification of pneumonia due to illness

Diagnosis of the disease by the causative agent largely dictates the methods of therapy and the choice of drugs. Depending on the causes and type of infectious agent, there are several types of the disease.

Inflammation of the lungs of viral etiology

Infectious pneumonia caused by viruses may be a complication of influenza, parainfluenza or ARVI (adenoviral form) or have a primary etiology. In view of the imperfection of diagnostic methods, it is not always possible to identify which virus is responsible for the occurrence of the disease, therefore, treatment is most often carried out with the use of a broad-spectrum antiviral drugs and is symptomatic.

If antibacterial agents are prescribed for the viral form, this means that there are symptoms or the likelihood of bacterial infection.

Bacterial infections in the etiology of pneumonia

If the pathogen is correctly identified and the effective drug is selected, the bacterial form is successfully treated with antibiotics. However, it is important to remember that it is necessary to select a therapy based on the sensitivity of the bacterium to the drugs of a particular group.

Staphylococcal form is most often a complication after SARS. The disease is characterized by symptoms of significant intoxication of the body, scarlet color of discharge of sputum, weakness, dizziness.

Mycoplasma form of pneumonia develops when specific bacteria, the mycoplasma, enter the lung tissue. Most often this form of the disease affects children and adolescents.

The disease is not distinguished by severe symptoms, which makes diagnosis difficult, is treated successfully, although the treatment process itself is rather lengthy due to the peculiarities of mycoplasma as a pathogen.

Chlamydial infection in the etiology of pneumonia

The cause of the development of chlamydial pneumonia is exposure to the respiratory tract and lungs of chlamydia, bacteria that normally cause bacterial chlamydia of the vagina. The most common way of infection from mother to child when passing through the birth canal, if there was no prenatal reorganization of the vagina and there is a harmful flora containing chlamydia.
This type is more common among children, especially infants, and adolescents, and at the initial stage has an unexpressed clinical picture similar to acute respiratory infections. Therapy for this form of the disease is chosen individually, taking into account the age and characteristics of the patient.

Together with mycoplasma infections, these two forms fall under the category of atypical pneumonia, also characterized by lesions of the alveoli and interstitial tissues. The nature of interstitial pneumonia is often protracted, with a transition to the chronic form.

Various fungal pathogens can also cause an inflammatory process in the lungs. At the same time, the diagnosis requires a thorough examination, since the clinical picture is not expressed, the symptoms for a long time can be quite “blurred” and do not correspond to the classic manifestations of the disease of bacterial etiology. Long-term treatment with antimycotic drugs.

Any types and stages of pneumonia are considered a serious disease, dangerous complications and adversely affecting the body as a whole. The course of correctly chosen therapy allows to cure patients with high efficiency, provided that they are treated promptly for diagnosis and in compliance with the specialist’s prescriptions.