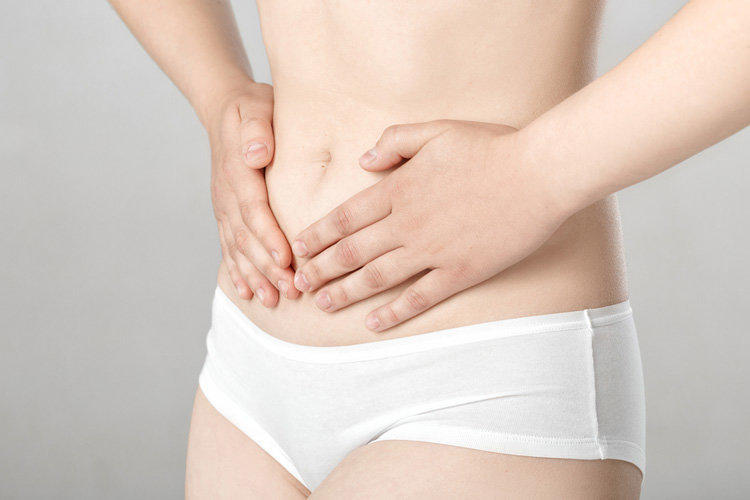 Lower abdominal pain in women can have a wide variety of causes related to both female physiology and anatomical structure, as well as diseases, dysfunctions and pathologies that are not dependent on the patient’s gender.

Most often, pain in the lower abdomen occurs when the gastrointestinal tract, urinary system, reproductive organs are impaired, but it can also occur due to nerve innervation disorders due to lumbar spinal cord injury, a systemic disease (for example, Crohn’s disease ), peritoneal muscle tension, increased gas generation or sensitivity during ovulation and during the menstrual period. How to determine the cause of pain in the lower abdomen?

Pain in the lower peritoneal region, with a clear and blurry localization (right, left, bottom, covering the entire lower abdomen) can occur as a result of organic causes and physiological processes in women. Pain syndrome may also accompany physiological processes, such as painful sensations when the bowel is bulging with gases produced during digestion, or pain when the muscular-ligamentous apparatus adapts to the growing volume of the uterus during the child’s gestation.

Abdominal pain in organic disorders due to various diseases and can occur in the following cases:

Pain is determined by the nature of the disease or pathology and can be characterized as sharp, pulling, grappling, aching, spilling, stabbing, sharp, dull, etc.

Abdominal pain as a symptom of appendicitis

Inflammation of the appendix or appendicitis , contrary to popular belief, may be accompanied not only by pain in the ileal region to the right. The classical picture of appendicitis starts with pain in the epigastric region, most often it shifts to the right, however, pain may spread to other parts of the abdominal cavity and radiate to the lower back. The severity and variety of sensations can be changed from sharp, cutting pains to dull and aching, depending on the severity of the inflammatory process. Appendicitis is also accompanied by an increase in body temperature, symptoms of general malaise (nausea, vomiting, chills).

With the development of an intestinal infection, the pain begins with dull non-localized pain, covering most of the peritoneum, further concentrating in the lower abdomen and returning to the lumbar region.

Pain with infections of the urinary system

Most often, in cystitis, pyelonephritis, the lower abdomen in women hurts, male patients with urinary tract diseases experience different symptoms due to the different anatomical structure of the body.

Pain in infectious diseases of this type are accompanied by frequent urination, there may be bloody inclusions in the urine. When pyelonephritis is also observed pain in the lumbar spine, often – body hyperthermia, signs of general intoxication (loss of appetite, nausea, headaches, etc.).

Endometriosis, the proliferation of endometrial cells, characteristic of the uterus, in the intrauterine space and beyond, is most often expressed by nagging pains that increase in the premenstrual and menstrual periods. Painful sensations vary depending on the stage of the disease and localization: the lower abdomen in the middle region hurts when the endometrium grows in the uterus, the retrocervical form of endometriosis and the growth of tissues in the appendages can hurt below the stomach, in the inguinal or pubic region.

Pain as a symptom of ovarian apoplexy

Ovarian apoplexy develops as a result of a ruptured mature follicle during the ovulatory period. The condition is accompanied by damage to the vessels of the ovary, hemorrhage into the peritoneal cavity. The provoking factors include intense physical exertion, sexual intercourse, etc.

A sharp pain on the right or on the left (depending on the location of the damaged ovary) in a woman during the ovulation period, accompanied by a drop in blood pressure, fainting, pallor of the skin is a reason for calling an emergency specialist. Ovarian apoplexy is a life-threatening condition that requires emergency surgery.

Uterine fibroids are accompanied by pain in the abdomen when the formation is of considerable size, exerting pressure on the surrounding tissues and adjacent organs (aching, pulling pain), as well as in the removal of the formation: the rejected myomatous node is accompanied by cramping pains and bleeding from the vagina. The treatment is purely surgical.

An ovarian cyst is a formation consisting of the body and the “leg” containing blood vessels. With physical effort, falling, sudden movements of the body, gymnastic exercises, the leg of the cystic formation is prone to twisting due to the displacement of the cyst’s body position. With partial torsion, venous blood outflow from the cyst body is disturbed, which is accompanied by nagging, aching pain from the affected ovary.

Full torsion of the legs stops arterial blood flow, causing tissue necrotization. This process is accompanied by a clinical picture of “acute abdomen”: strong, cramping lower abdominal pains on the right or left, hyperthermia, signs of poisoning of the body. Urgent surgery is required.

Inflammation of the appendages, uterine cavity

Andexitis, salpingoophoritis, endometritis, inflammation of the uterus and its appendages of various etiologies, depending on the form of the disease, can be accompanied by aching, drawing pains in the lower abdomen and groin, as well as severe painful sensations that increase with palpation of the inflamed organ.

Implantation of an egg after fertilization outside the uterus (most often in one of the fallopian tubes, less often inside the ovary, in the peritoneum) is accompanied by pain of a pulling, aching nature in the lower abdomen, radiating to the lumbar region.

With the growth of the embryo, increased pressure on the surrounding tissue begins, with tubal pregnancy without surgery, accompanied by rupture of the fallopian tube, sharp, severe pain, internal hemorrhage. Treatment is emergency, operative.

Why does lower abdomen hurt during pregnancy

The first trimester of the gestation period is often accompanied by pain in the lower abdomen. It can hurt below the abdomen, in the groin area during the first months with a threatening miscarriage, ectopic pregnancy, accompanying gestation and aggravating diseases on its background.

However, most often such pulling, aching pains are called “uterus tone” and mean the physiological process of adaptation of the muscle tissue and ligamentous apparatus to changes in the reproductive organ. In the absence of additional symptoms, such pain does not require therapy or anesthesia. In some cases, spasmolytics can be prescribed (Papaverin, No-Spa).

Sick lower abdomen in the second and third trimester may also be due to the increasing load on the ligamentous apparatus, accompanied by softening of ligament tissue, lack of calcium, pressure on the cervix. Normally, physiological pain does not require treatment and is relieved by relaxing, changing body position, moderate physical exertion.

A sharp, pronounced pain syndrome with localization of the lower abdomen with a low location of the placenta may be a sign of its premature detachment and require urgent medical intervention. Cramping pain, periodic tension of the uterus can be both a sign of the beginning of the “training fights” of Brexton-Hicks, a physiologically normal phenomenon, and a symptom of the threat of miscarriage. If any new pain appears, consultation with a specialist is necessary.

This diagnosis is most common at the age of puberty and the formation of organs of the reproductive system. Algomenorrhea is accompanied by pain before menstruation. Requires differentiation from premenstrual syndrome, endometritis, endometriosis, congestion associated with uterine bend, intrauterine inflammatory diseases, etc.

Why does lower abdomen hurt in the middle of the menstrual cycle?

Pain during the ovulation period occurs in about 10% of women of reproductive age. They are most often characterized as stabbing, localized on the side of one of the ovaries (bottom right or left), or pulling, accompanied by a feeling of a “tight lump” in the lower abdomen.

As a rule, such sensations last no more than 24-48 hours, ending with the release of an egg from the ovary. If you pay attention to the vaginal discharge, then on this day they will be more mucous, thick, “vitreous”, slight bloody inclusions are possible.

Such pain, not accompanied by additional symptoms, does not require treatment. A single dose of antispasmodics or painkillers may be prescribed by a doctor.

Most often, pain at the end of sexual intercourse, which is not accompanied by orgasmic contractions, is associated with edema of the tissues, a rush of blood to the organs in the process of stimulation. It is also possible pain associated with tissue trauma during excessive sexual intercourse, and pain as a symptom of diseases of the pelvic organs: adhesive disease, endometriosis, endometritis or andexitis in a chronic form, cervicitis, tumor tumors of the genitals.

Pain is most often a sign of disorders, dysfunctions, and painful processes in organs and tissues. The physiological causes of pain in the female reproductive system are limited to the menstrual cycle, ovulation, gestation, and usually manifest as pulling, aching pain, limited in time and occurring on certain days and periods.

All other manifestations of abdominal pain should be a reason for examination by a specialist and a course of treatment.

Skin Cancer: Symptoms and Signs of the Initial Stage

Helminths in humans: what pills to take