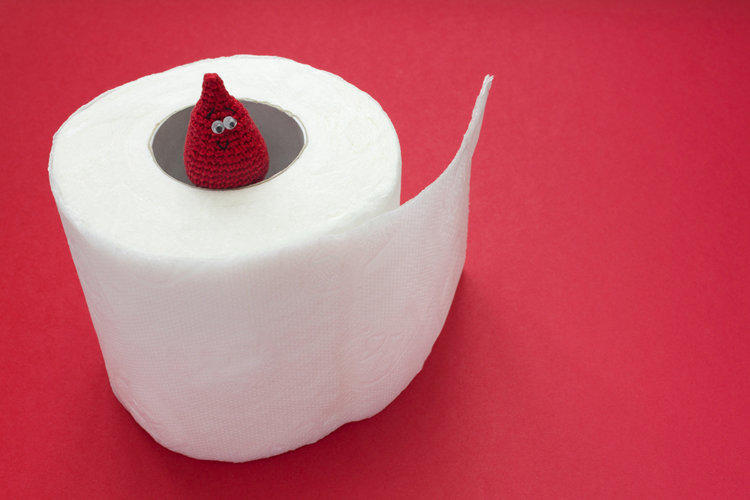 The causes of bleeding from the anus in men are quite diverse. Most often, the blood from the anus in men is a sign of diseases or injuries of the lower intestine, large intestine. But other diseases, including those not related to the gastrointestinal tract, can also lead to this symptom. Why can there be scant or profuse bleeding from the anus, blood after a bowel movement, in which cases the stool with blood is accompanied by pain and which doctor should be consulted for diagnosis and therapy?

When bleeding from the anus is a reason for an emergency visit to the doctor?

In the absolute majority of cases, the blood during stool in the feces or its discharge from the anus during defecation in men without pain, pain in the anus, the detection of marks on underwear, hygiene products should become a reason for examination by specialists. Blood with feces in men (even if the bowel movement is free of pain) may indicate a multitude of diseases and pathologies, ranging from practically harmless mucosal cracks and ending with intestinal cancer, leukemia and other life-threatening diseases.

However, there are a number of bleeding characteristics where emergency help is vital. The call of the ambulance team or immediate hospitalization should be accompanied by the following manifestations:

All the above symptom complexes are signs of conditions that threaten health and life due to injuries, pathologies, infectious and somatic diseases in the acute stage. Self-treatment or waiting for a visit to the doctor at the clinic in such cases is unacceptable.

What kind of diseases can a discharge of blood from the anus be?

The gender of the patient is also important: although the causes of bleeding from the anus are the same for men and women, during gestation and after childbirth, women are more likely to experience the effects of varicose veins in the lower intestines, stagnation of blood supply in the pelvic organs and the effects of delivery.

Somatic and infectious diseases of the digestive system, especially in the acute stage, are expressed by a symptom complex, in which blood can also be noted from the anus during bowel movement, straining or spontaneous. Primary differential diagnosis is carried out, taking into account the following features and signs of disease:

From the absence of symptoms to abdominal pain, weakness, general malaise, weight loss

In most cases, the disease occurs in adults with an increase in the older age period (45-50 years old) and in the child bearing period and after delivery.
The process of pregnancy is accompanied by changes in the hormonal background of the body, leading to changes in the elasticity of the vascular walls, which, in combination with the increased pressure of the growing uterus on the intestinal veins, digestive disorders and bowel emptying, leads to varicose veins of the anus in the rectal walls.

The debut of the disease is most often noted in the postpartum period, when excessive pressure on the veins during the inflammatory period leads to inflammation of hemorrhoids and cracks, and the absence of a bowel movement in the first days aggravates the problem with subsequent constipation.

The amount of blood secreted depends on the degree of the disease and the characteristics of its manifestation: most often, the quantitative indicators of bleeding are insignificant, but in the later stages, the bleeding can be severe, leading to anemia, deterioration of the general condition. The treatment is carried out by a proctologist, in most cases, quite conservative methods.

The appearance of a microcrack in the skin or mucous membrane of the anorectal region is in most cases caused by stool dysfunctions, chronic constipation, resulting in damage to the surfaces. Diagnosis is carried out on the basis of anamnesis, in which there are blood in the feces and acute pain during defecation, as well as an examination, which allows to detect a crack.

Therapy is based on the normalization of defecation, the use of disinfectants, painkillers that promote surface regeneration and relaxation of the sphincter muscles.

The basis of therapy is to improve the processes of digestion, change in diet, provoking constipation, regular hygiene of the anus. Without these areas of treatment, medications will have the character of temporary therapy, relapses of the disease with intestinal dysfunctions are almost inevitable.
Injuries of the anorectal region, not accompanied by constipation, are cured with the help of regular hygiene procedures, prescribing of regenerating and antiseptic preparations.

These diseases without systematic therapy lead to the formation of intestinal tumors, ulceration of the mucous surface, rupture of the intestinal sections. Therapy is predominantly conservative, with the use of hormonal agents that suppress auto-aggression of immune cells, analgesics, means for stool normalization and digestion.

Diseases of infectious etiology can also manifest as bleeding from the anus. Common causes include a pronounced course of enterovirus and rotavirus infections, which are accompanied by irritation of the intestine, erosive damage to its inner surface, which is accompanied by the release of blood with feces from men. Also, the blood goes without regard to the moment of bowel emptying.

Typhoid fever, dysentery, hemorrhagic fevers of various origins, accompanied by violations of the blood formula and massive internal bleeding, also lead to the appearance of blood from the anus and require urgent treatment in the hospital. High mortality in these diseases makes it necessary to contact the clinic at the first suspicion of the possibility of infection or the presence of the corresponding symptoms.

If the parasites reproduce excessively in the intestine, they destroy the integrity of the mucous membrane, which leads to bleeding of the injured surface, which can result in chronic anemia and general depression of health indicators.
Parasitosis is accompanied by a decrease in immunity, allergic reactions, an abundance of respiratory viral and bacterial diseases, and dysfunctions of internal organs. At the stage of detection of bloody discharges in case of helminthic invasions, the patient needs urgent specific therapy, often in a hospital setting.

Which doctor should I consult for bleeding from the anus?

If the blood inclusions are insignificant and are not accompanied by a sharp deterioration of the condition, the symptoms listed above and requiring urgent hospitalization, then the physician and proctologist will become specialists of the first choice. If necessary, a gastroenterologist, an infectious disease specialist and other specialists can also carry out examination and diagnosis, depending on the primary diagnosis.

In some cases, bleeding can not be determined by visual examination of fecal masses, since the localization of the source of blood in the upper intestines, stomach or esophagus, the blood passing through all parts of the digestive tract, changes color to dark brown or black. With abundant discharge of blood, this leads to the appearance of the so-called tarry stool: a dark color, dense, sticky substance. Minor bleeding can only be detected by analyzing feces.
The following methods can be used for the survey:

Why does osteochondrosis occur and how is it treated?